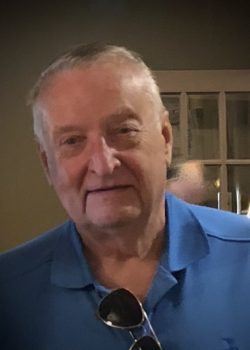 Denis Peter Dorsey died on May 9th in his home in The Villages, Florida after a bravely fought
battle with cancer. Denis was 85 and is survived by his daughters Kelly Macauley and Kristen
Torchia, son-in-law Michael Torchia, grandsons CJ Macauley (wife Victoria), Charley Macauley
(partner Rebecca), Casey Macauley and Nicky Torchia, and great-grandchildren Adriana Macauley
and Callen Macauley.
Denis, was a 50-year resident of Red Rose Gate in Levittown, Pennsylvania where he raised his
family with his loving wife Meg Gandy Dorsey, who passed away in 2013. He grew up in the Albany,
New York area and was one of six children to Ila and Leo Dorsey. He was an alumnus of the
Cobleskill High School Class of 1954, graduated from the University of Delaware in 1958, and later
earned his master’s degree from Drexel University in Philadelphia.
Denis spent most of his professional life as an electrical engineer for RCA at the David Sarnoff
Research Center in Princeton, New Jersey. He was a leader in his field and filed many patents.
Denis worked on several high-level projects during his career and had the distinction of traveling
to China in 1972 as part of the team setting up communications for President Nixon’s historic trip.
After his retirement from RCA he started a biotech medical company. He was always actively
learning, growing and developing his interests.
Denis and Meg enjoyed many happy years summering at Gandy’s Beach, New Jersey watching their
daughters grow up. They escaped the winter months during retirement to the Caribbean island of
St. Maarten. They loved to travel together and took many trips to various places around the world.
They especially enjoyed the beach, boating and vacations at sea. After losing his wife, Denis moved
to The Villages in Florida.
Denis was good natured, friendly and always ready with story or a joke. He loved life and was
devoted to his family. He was a wonderful father, always supporting and encouraging his daughters
to live their best life. He was a big sports fan playing basketball in high school and college and had
a special love for baseball and the Yankees. When his grandsons were young, he never missed a
game and was the official score keeper for their Middletown Athletic Association baseball teams.
He never missed a school event, concert or show even if it was across the country.
Denis enjoyed woodworking and always had a project going in his garage. He dedicated many
hours building sets for the Maple Point Middle School plays where both of his daughters taught
and his grandsons attended. Denis was an avid photographer documenting the many joyous
moments of life, family and adventures. He loved listening to music, going to concerts, playing
cards, dancing with Meg and in his youth even played the electric guitar and would jam with his
daughters. In his later years he maintained his positive attitude, enjoyed shopping, flea markets,
surfing the internet, YouTube videos, reading and watching TV.
Denis passed peacefully in his home with daughter Kelly and his devoted caregivers by his side. He
lived a long and prosperous life and never stopped dreaming of tomorrow. For him, 85 years was
just not enough time to live the life he loved with the friends and family he adored. Denis was a
bright light in the lives of all who knew and loved him.
The family will be receiving friends at the Faust Funeral Home, 902 Bellevue Avenue in Hulmeville,
PA 19047 on Thursday, May 26th from 4:30-6:30 with a service at 6PM. In lieu of flowers,
memorial contributions in Denis’s name can be made to the American Cancer Society.
To donate to the American Cancer Society in Denis’s memory please go online to:
http://main.acsevents.org/goto/DenisDorsey
or visit cancer.org or call 1-800-227-2345
By mail: PO Box 22718, Oklahoma City, OK 73123