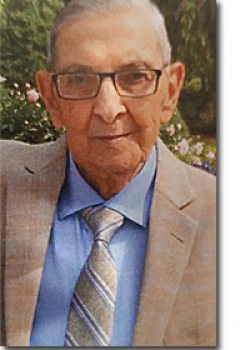 John A. Miroballi of Bensalem, passed away peacefully at Chandler Hall Hospice on Wednesday, January 31, 2018 he was 89 years old.Born in Altoona, PA John served in the United States Airforce during the Korean War before becoming a welder with U.S. Steel.

John was preceeded in death by his son Daniel J. Miroballi.John will be sadly missed by his beloved wife Janice L. Miroballi (nee Roth) and their children Michael Todd (Laura) Edwards of Feasterville, PA., Robert (Jayne) Edwards of Levittown, PA and John Michael Miroballi of Morrisville, PA.Along with his cherished 5 grandchildren and 4 great-grandchildren.

The family requests services to be private.