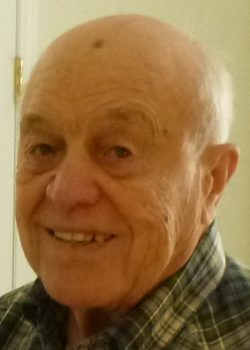 Joseph E. Rothenbach passed away peacefully on Friday, January 8, 2021 at Juniper Village at Bucks County. He was 97. Born in Clementon, New Jersey to the late Peter Rothenbach and Laura (Spingler) Rothenbach Kniley on November 14, 1923, Joseph spent his childhood years in the Feltonville section of Philadelphia. In January 1934, his family moved to Langhorne Terrace after the Great Depression took his family’s home in Philadelphia. His father passed away shortly after. With his father gone, his mother opened a small neighborhood grocery store that adjoined their home on Periwinkle Avenue. Joseph helped his mother in the store during those early years. In 1947, he married Margaret Shields of Newtown. They had three children and resided in Langhorne Borough on Wells Avenue for 67 years before moving to Juniper Village at Bucks County in Bensalem six years ago.
Joseph was a 1941 graduate of Langhorne-Middletown High School. He is a World War II Army veteran having served proudly in Europe with the 1270th Engineer Combat Battalion which was attached to General George Patton’s Third Army. After the war, he worked for the Langhorne Post Office and later as a bookkeeper at his brother Bob’s building supply company (Penndel Builders Supply). In 1956, Joseph accepted a position with Peoples National Bank on Bellevue Avenue in Langhorne. Later he was assigned as manager of the Penndel office. The bank went through many iterations during his tenure. The bank was then Meridian Bank when he retired as a vice president in 1980.
Joseph was a lover of sports. He was a longtime member of the Middletown Country Club and fan of Neshaminy High School football and baseball and all Philadelphia sports teams. Joseph served as a Neshaminy School Board Director, Langhorne Borough Tax Collector, Treasurer of the Pennsylvania Sports Hall of Fame, coached Langhorne Little League and the Legion baseball teams. He was a member of the Langhorne Rotary Club, the Neshaminy “N” Club, Langhorne Heritage Farm, Langhorne Historical Association, and the American Legion Jesse Soby Post #148. Following his retirement, Joseph enjoyed golfing, woodworking, home projects, traveling, and visiting friends and neighbors around his beloved Langhorne.
Predeceased by his wife of 72 years, Margaret (Shields) Rothenbach, and brothers Walter and Robert Rothenbach, Joseph is survived by his loving children, Peter Rothenbach (Chris) of Payson, Arizona, Thomas Rothenbach of Buckingham, and Diane Johnson (Eric) of Yardley, his grandchildren, Cindy Bublitz (Dwayne), Christopher Johnson, and Sarah Johnson, great grandchildren, Kirsten and Faith, and several nephews and nieces.
The family would like to thank Juniper Village Skilled Nursing and Caring Hospice Services for their compassionate care of Joseph.
To respect Joseph’s wishes, a private graveside service will be held at Newtown Cemetery.
Faust Funeral Home, Inc.